Larry Sitsky at 2015 Art Music Awards: 'If we don't take our culture seriously, who will?

The 2015 Award for Distinguished Services to Australian Music was presented to composer, pianist and scholar Larry Sitsky AM at the Award ceremony in Sydney on 11 August 2015. Sitsky's acceptance speech (see transcript of the speech further down) draws attention to the opportunities offered by Australia to a 15-year-old refugee with a multicultural background, the many threads that form the fabric of his artistic career, as well as the crisis of arts funding in today's Australia. The Award was presented to Sitsky by Robyn Holmes, Senior Curator from the National Library of Australia.

Let me introduce you to the Larry Sitsky I first met 40 years ago when I invited him to adjudicate the Young Composers Award in South Australia. Sitsky was at once gracious, humble, quirky, curious, provocative, insightful and awe-inspiring. What struck me most was the passionate intensity, encouragement and respect he gave to each participant's musical creativity, whether aged 7 or 25.

Since 1990, as well as garnering a deep personal friendship, I collaborated with him as colleague at ANU, wrote his biography and, as Curator of Music at the National Library, collected his personal archive for the National Library. I have continued to witness his unabated and voracious energy and passion to know, to think, to create and make music, a quality that infects and charms all who have come within his orbit.

He is also frank and fearless. Larry has stood up for the cultural imperative of music in Australian life, espousing its centrality to the intellect, spirit and heart not just of individuals, but of our nation. As a post-war refugee, a Russian exiled from Mao's China in 1951, he has handed on to Australia his own inherited cultural traditions: Russian pianism, European musical architecture, Chinese sound worlds, Jewish heritage, Eastern and Western symbolism. As a pianist, he has carried the torch to keep alive the historical performance lineage of the piano.

Equally he has turned his viewpoint to Australia, his adopted place, his home. He has insatiably researched, edited, performed, recorded, broadcast, taught, composed and promoted Australian music and musical life, past and present. He has journeyed from 'enfant terrible' of the 1960s avant-garde, an erstwhile 'agent provocateur' about matters of national funding and organisations, to become a distinguished elder of Australian music. 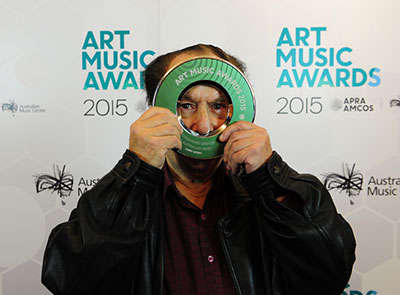 You only have to explore the 200 plus boxes in his vast archive at the National Library to find every musical controversy and euphoria in our living memory richly documented. He has cultivated a different prism through which to view and hear the music of our nation. In weaving a thread through Australian art music from the past to the present, he challenges us to know, value and respect our own mix of inherited and living music traditions.

Yet Sitsky has always felt himself to be an 'outsider' within the musical establishment. Like others, I had assumed this emanated from his refugee status and unique cultural background, or because he chose to live in Canberra, or because he was perceived as a 'high priest' concerned with the mystical power of music. In the course of researching for his 80th birthday celebration at the Library, I discovered in his archive an extraordinarily personal insight into his 'outsider' feeling in a diary he wrote in Russia in 1986, when he was an invited guest at an international composers festival. He speaks of the personal 'blessing' of multi-talent, the problems it causes, the suspicions it engenders. In his words:

'Intellectual curiosity lands one in constant turmoil, because the sense of search never ends. Rewards there may be ...but there is also a toll, a kind of "departure tax" which manifests itself in constant dissatisfaction with one's achievements as well as a burning desire to discover more and more.'

I read this to him during our public interview for his 80th, and for once he was dumbstruck. But, with typical Sitsky mischief, he recovered with: 'I couldn't have worded it better myself'.

If ever there has been a remarkable multi-talent in Australian music, Larry Sitsky has been its most outstanding exemplar. He has quested ceaselessly to be pianist, composer, researcher, editor, teacher and mentor and has pursued the highest levels of excellence in each. These are not separate achievements, they emanate from the one consummate musical soul.
Thank you, Larry Sitsky, for your holistic and outstanding contribution to Australian music, setting a standard of excellence and a questing spirit to which we can all aspire on our own creative journey.

Dear Colleagues! This is a signal honour, and I am well aware of it.

I thank APRA and the Australian Music Centre for supporting this overview of my work and believe that it is a national disgrace the way arts and arts funding is playing out in this great country of ours. 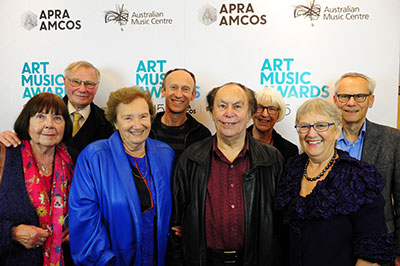 I am very happy that members of my family are here: my brother Robert and his wife Lynn, my son David and my wife Magda, who has put up with me for over fifty years.

We have always been profoundly grateful to Australia for taking us in, and granting us citizenship. I arrived with my family as a 15-year-old refugee from the wars and upheavals in North China, straight into a culture shock in the Sydney of 1951, and spent a number of years searching for my identity.

In answer to reporters over the years, I have consistently described my cultural background as a complete salad. In those days, the word 'multicultural' wasn't used. They spoke, rather, of assimilation and integration. This made the identity search harder, not easier.

So, the afore-mentioned messy salad includes elements from Russian culture (music as well as poetry); (Chinese (from which I received a love of opera, percussion, legends and rituals); Jewish (cantorial chant, kabbalistic practices); oriental mysticism in general, love of the archaic, pianistic inheritances, including a large dose of Busonian and Scriabinesque mysticism and its linkage to musical compositional techniques, plus some added ingredients picked up along the way such as Armenian music and the championing of Australian music.

This last happened after studies at my alma mater just up the road here, which I believe is yet again in a spot of bother.

The philosophy behind propagandising Oz Music is simple: if WE don't take our own culture seriously, who will?

I tell my composition students that 'a composer can do anything', and so have strived over the years to lead by example, and juggle simultaneous careers as composer, pianist, teacher and scholar. This hasn't always been easy, and only came together, as it were, after many years of confusion, juggling hats, and finally learning that one activity feeds off another one.

Jean Cocteau once wrote: 'Art is not an occupation, but a priesthood.' I believe that I have lived by this precept over many years.

And somewhere, mixed up in all this ever-growing monster of a salad, there is lurking the Shakesperean injunction 'to be true to thine own self'.

Interest in mythology and magic looms large as well, and my bookshelves are crowded with texts on what is generally labelled 'occult' although if it were truly occult, there couldn't possibly be books on the topic, could there?

In general, all these are grist for my compositional mill, and it matters little whether I believe in the texts or not, as long as new pieces are triggered by the reading process. As a small example, the many texts on Egyptology have spawned a number of works.

In general, I have given my life to tertiary music education, have held a number of positions, although always resisting attempts to move me into administration, and, sadly, have witnessed deaths by a thousand cuts, including the spectacular and utterly foolish massacre of the School of Music in Canberra.

We have to, all of us, collectively, speak to our politicians, and repeatedly drum into them what is bleeding obvious: music is a defining cultural emblem of a nation, but it needs nurturing if it is to develop, and not become a museum art.

Together, we can do it.

Finally, if anyone is at all curious, by the end of next year I should have completed possibly the very first grand opera expressely designed for the computer. It is based on Thomas Mann's Doctor Faustus.

Thank you so much for being attentive.