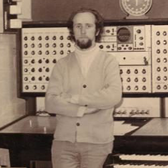 The Australian Music Centre is saddened to hear of the passing of composer Paul Copeland on Saturday 16 April, 2022.

Paul was an award-winning composer, who explored a range of musical styles, from neo-classical, jazz, and musical theatre, to electronic, avant-garde, and experimental music.

Growing up in a musical household, he began studying the piano at 15 and enrolled at the Melba Conservatorium a year later. While he found himself ill-suited to the life at the Conservatorium, he continued to compose on his own and went on to study with Felix Werder.

Paul most notable compositions include String Quartet 1, a graphics-based aleatoric score, and Subterranean Rivers. Paul was also an accomplished computer graphics artists and programmer, having published three books on the subject, and received a commendation from digital art pioneer Laurence Gartel from his print Suspicious Shapes Number One, from the Diary of a Madman.

In 2016, Paul was awarded the Jean Bogan Prize for Piano Composition for his work Audacious binary forms, which he considered to be his most important.

Pianist Michael Kieran Harvey, who premiered the work in 2017, says, "Paul was something of a maverick, an outsider, and had been influenced by Felix Werder, an iconoclastic figure on the Australian music scene whose work I had last performed at his 90th birthday concert (broadcast from Melbourne by the ABC). This work combines complexicist, post-modern and stochastic notation, graphic notation and theatrical elements in a refreshingly playful manner, reflecting Paul's varied interests and engaging personality."

While he also enjoyed composing easy piano works for children, Paul's work remains at the forefront of experimental art music, with influences from Luciano Berio and Karlheinz Stockhausen.