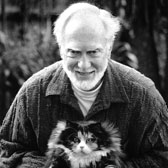 The Australian Music Centre was saddened to hear of the passing of Nigel Butterley AM on 19 February 2022.

Nigel was a pre-eminent and prolific Australian composer, broadcaster, and teacher. As eloquently phrased by Elliott Gyger, he "a key figure in the coming-of-age of Australian music in the 1960s", whose works influenced the likes of Tippett, Cage, Messiaen, and Gubaidulina. Nigel has been recognised with a number of awards and prizes throughout his career, including the Prix Italia (1966), Albert H Maggs Composition Award (1967), and the Paul Lowin Orchestral Prize (2001).

The outpouring of tributes from the music community is a testament to his wide influence and impact on the sound of modern Australian music, with his music continuing to be featured in concert performances and projects in Australia and abroad.

Nigel has been the subject of several articles published on Resonate, and we share them again with you now in reflection of his inventiveness and innovation:


We send our deepest condolences to Nigel's family and friends at this time.