Building a city, building a symphony

Andrew Schultz jokes that he always wanted to 'score a century' for Australia. It seems at last he has succeeded.

Schultz's Symphony No. 3, discussed in this article, has been recorded for digital release by Tasmanian Symphony Orchestra. There is also a music education resource about the work, the written part of which is available for free download on the composer's website.

The recent Canberra 100 celebrations featured a newly commissioned work by composer Andrew Schultz. It was performed on the balmy evening of 11 March on the lawns outside Old Parliament House by the Canberra Symphony Orchestra and three ACT choirs, conducted by Nicholas Milton. The performance was amplified live all around Lake Burley Griffin, where many thousands had gathered to mark the 100th anniversary of the naming of Australia's capital city - Canberra. Schultz admits that he was honoured to be chosen for this commission; a choice made by the Centenary's creative director Robyn Archer, based on Schultz's track record of writing powerful music that explores Australian subject matter, often from unusual viewpoints.

The composer wrote two pieces for the commission: a choral piece called Three Architects, Op. 91a and a three movement orchestral work, Symphony No. 3 - Century, Op. 91. For the Centenary celebrations, the two pieces were performed as one, with their movements interspersed. Schultz chose this form as he wanted to explore texts related to Canberra's architectural history, but also to explore other themes about artistic endeavour in general. He thought the combination of these ideas was relevant to the Centenary celebrations, but also that, in future, if the pieces were performed separately they would have a broader significance to Australian audiences. 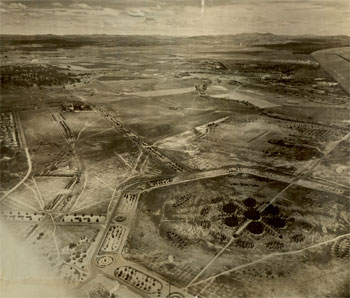 Although the two works are related (each choral movement is related thematically to the symphonic movement which follows it) they explore divergent ideas. The texts of Three Architects are taken from three Chicago architects: Walter Burley Griffin, Louis Sullivan, and Daniel Burnham. In their texts we hear the idealism of young architects, a compassion for society and the common man, and a desire to create something great, something extraordinary, for the new capital city of Australia. The orchestral movements take the story further. Here we can imagine the space and grandeur of the landscape, and the natural sounds of the Australian bush, often harsh and bright. Across the three orchestral movements, themes of 'youth and idealism', 'struggle and the creative process', and 'reality and compromise' are explored. Time and time again in the orchestral writing, large-scale and epic music dissolves to expressive wind solos from clarinet, oboe and horn, as if to suggest that it is the individual who is always pitted against the great forces of nature and society.

The three choral movements are written for unaccompanied adults and children's choir. In order to explore the timbral and textual differences, Schultz keeps the choirs separate until midway through the third and final piece. The timbre of the children's choir, combined with hand bells, is used to express shimmering excitement and hope in the first choral movement, 'Burnham.' The music sets the words of Daniel Burnham: 'Make no little plans, they have no magic. Make big plans - aim high, in hope and work'. The optimistic architects coming out of the American intellectual revolution of the late 1800s and early 1900s firmly believed that anything was possible. It was these words and theories that formed the architectural aesthetic of the young Walter Burley Griffin as he penned his plan for Canberra in a Chicago atelier. For Griffin, like many others of the era, anything must have seemed possible in the first decade of the twentieth century.

In contrast, the restless lullaby of the adult choir, full of rich chords and intricate part-writing, warns of the persistent tempo of time and ageing. The text is from Louis Sullivan's speech 'The Young Man in Architecture' of 1900, and his ideas are fresh and radical. He believed that good architecture could make a difference to the lives of the common man. His words show the excitement of an era, but there is also restlessness, for although anything was possible, he knew that large projects consume time, and time deserts us all in the end.

Having explored the lightness of the children's choir and the richness of the adult choir, Schultz uses the last choral movement to find a way to bring the elements together. For this, he takes words from Griffin's Canberra Submission Plan, 1913. His text outlines ideas for stylistic unity and functionality. Griffin believed that good design meant finding the simplest, most elegant solution, which was then used as a pattern (repeated and developed) to achieve stylistic unity across a project. This idea relates particularly well to music composition, and Schultz uses it to find a unity between his choirs.

The architectural idea of the final choral movement is that the composer has taken one small motif, a fragment of sound, and then developed a number of ideas from that sound. The ideas are varied through changes in metre, timbre, range, texture and modality. At the start, the two choirs have dissimilar material, which is performed as an antiphon. As the piece progresses, however, the material is repeated and modified so that the links become apparent and eventually the choirs come into alignment with music that is heard in the subsequent orchestral movement.

Although Three Architects was composed to commemorate the centenary of Canberra, and was based on architectural texts that are more than one hundred years old, the ideas expressed in the texts are still relevant to modern audiences. The symphony however, is a more personal and reflective look at artistic practice in Australia. It depicts the stages that an architect (or composer) works through when they create - they struggle against constraints, dream of the possibilities, and then finally create by committing their ideas to paper.

'Struggle' is the first orchestral movement of Symphony No. 3 - Century. It portrays the pre-1913 Australian landscape in juxtaposition with the ideal vision of town planning of the era - Chicago's White City of the Columbian Exposition of 1893. The movement is in sonata form, which Schultz uses to help convey the contrast between the massive and the individual. 'Struggle's' exposition begins with a statement of the 1st subject based on a raucous native birdcall. The 2nd subject is a direct quote from the song 'Burnham' ('make no little plans, they have no magic'). It is broad and lyrical and presented in wind solos, which makes a stark contrast to the fast complex rhythms of the 1st subject with its domination by forceful brass and percussion.

The second movement, 'Dream', describes the moment where Griffin tries to visualise how his architectural ideas could fit onto the wide undulating, natural spaces of the Australian landscape. The movement conforms to the traditional role of the symphony's middle movement, in that it is calm and gentle, providing contrast to the first and last movements. The composer has chosen an arch form, a dream-like march that builds up in waves and then, after a brief moment of lucidity, quickly dissolves. The piece is linked with the choral movement 'Sullivan' through a shared theme and chord. In the choral work, both the theme and chord are used where the subject of time and aging is being depicted. It is as if these sentiments carry through to the orchestral movement and we can feel the frustration of the architect when he cannot quite grasp the ideas clearly enough and feels them dissolve before him.

In this monothematic movement the development is not thematic but, rather, modulatory and timbral and creates a strong but simple architecture. In the first and third movements the composer has used timbre to create a dry, crisp sound that can be associated with Australia. In this middle movement he uses timbre to create a progression. Soft, neutral, string sounds are used at the start of the movement to depict unfocused ideas. As the ideas become more solid, the pitch and volume rise, and the timbre gains more clarity and draws in the brass. At bar 123 the woodwind enter en masse for the first time and it is this clarity that seems to bring the climax when the full orchestra plays. However, the clarity is brief, and the lines fragment and slip away with brief wind solos.

In the last movement, 'Create', the composer has combined a few important ideas. The title of the movement refers on one level to the building of the city Canberra, yet also implies much about the way an artist works. Whilst the motor rhythm used shows the frenetic activity of design and construction, the dark moments in the piece reflect the trials of creating in the face of criticism and seemingly insurmountable obstacles. For Griffin, the outbreak of World War I in 1914 had dire consequences for his artistic plan. Other artists deal with a range of complications, and it is often only by determination and compromise that a result is achieved. In reference to the philosophies of the architects, the composer has tried to take one idea, one sound, and let everything fold out from this one idea. The movement is also a little nationalistic, it tries to capture the clean, sometimes sharp sounds of the Australian vocal accent. This is achieved by using the bright solo timbres of the solo woodwind instruments in highly personal writing.

Both works commemorate the centenary of Canberra by exploring the original ideas behind the designing of the city. However, the optimism of the three architects should not only be celebrated as something of the past but should be embraced as a guide for the future. So too, the symphony, with its personal look at the artistic process, shows that persistence and integrity are needed in most ventures. It is these pertinent ideas that will, hopefully, help Schultz's Three Architects, and Symphony No. 3 - Century, become part of Australia's canon of artistic enterprise.