A new biography charts the life and music of Dulcie Holland

by Jeanell Carrigan and Rita Crews

Jeanell Carrigan and Rita Crews's new book A Musical Missionary - the life and music of Dulcie Holland forms part of a major project which also includes a portrait CD with a selection of the composer's works and six previously unpublished scores. Of the two writers, Dr Crews knew Holland personally and had the opportunity to discuss music with her, while Dr Carrigan has come to know Holland through playing her compositions. In this article, the two musicians talk about their work on the project.

It seems clear to me that music is one of the most civilising and enriching elements in our lives. It uplifts us and sustains us, it consoles us in time of sorrow, calms us in times of stress, and delights us in time of joyful celebration. There is music for all seasons, inexhaustible in its variety. (Dulcie Holland in 1995)

It was high time that a book was written about Dulcie Holland. Research for the project and accessing relevant material, including searching for long-neglected or elusive scores, took place over many months. Visits to the National Archives of Australia in Sydney, the National Library in Canberra, various university and conservatorium libraries, the Film and Sound Archive, the archives of Kambala and Ravenswood schools, the North Shore Symphony Orchestra and St Luke's Church, as well as the Australian Music Centre, all brought forth a wealth of material, much of it unknown or forgotten. Colleagues, other composers, conductors, and organists as well as former students also contributed to the project with anecdotes and reminiscences about the composer. 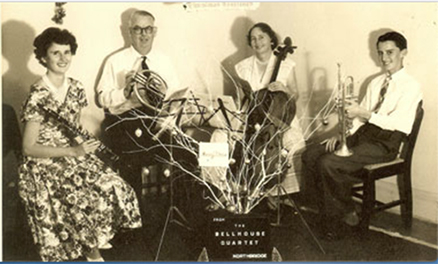 Dulcie Holland's family were incredibly supportive of the project and provided us with the entire Holland/Bellhouse family history, photo albums and Dulcie Holland's travel diaries. When planning the book, each one of us chose to write the chapters we felt most comfortable with and where we could make the best contribution. Consequently, the book is divided into nine chapters beginning, appropriately enough, with A Life in Music. This is a comprehensive discussion of Dulcie's family background and ancestry, her education and training, her overseas travels, and her time at the Royal College of Music in London. The places she worked in, her marriage to Alan Bellhouse and the second trip to London with Alan and their two children are all detailed.

The subsequent chapters - each of which begins with a quotation from the composer - are neatly divided into the various types of music Holland wrote, including little-known works such as the five pieces for the Sydney University War Memorial Carillion and the orchestral works for the North Shore Symphony Orchestra, founded by her husband, and the orchestra in which she also played the cello. Works for keyboard (piano and organ), solo instruments, ensemble, voice, and choir are all discussed and analysed.

Score excerpts form a major part of the publication, including some from the 40 scores for film that Holland produced between 1949 and 1963, although only a few of these have been located as most have been lost or misplaced over the years.

Throughout its 170 pages, the book has copious illustrations as well as two appendices that include the first comprehensive list of Holland's works that has appeared in print and a list of the many prizes and awards she gathered over her lifetime.

Holland was such a modest woman. In her obituary of Holland, Jyoti Brunsdon wrote: 'She felt incredibly grateful for all the opportunities she had. Dulcie never complained about anything. It was not in her nature.'1 Her granddaughter commented, when the book was proposed: 'She was always only Grandma to us!' Holland herself decided not to burden her own children with the legacy of her compositions and made provisions for storage at the National Library of Australia. When Holland won the major scholarship that was on offer for composers at the Royal College of Music in 1939, the Blumenthal scholarship, her only comment in her diary was 'is it really true?'2 This scholarship had been previously won by British composers such as Elizabeth Maconchy, Helen Perkin and Monica Myatt, and was certainly an indication that Holland was on the right track with composition. She accepted it graciously and gratefully, as with many other awards, not expecting it as her due.3

Dulcie Holland was always described as having an engaging and outgoing personality. She considered herself to be first a pianist, then a composer and thirdly a teacher, but composed music well into her eighties 4. One of her last works is the string quartet Salute to Jacques (1997), written for the second son of Pierre Emery and Leonie Ziegler and played at Jacques's christening on 24 August 1997. Holland was then 84 years old. Her compositions, numbering at least 330, included music in all genres except opera, though her musical play Jenolan Adventure was certainly a work of drama for the stage. As mentioned above, documentary films, chamber music, works for orchestra, instrumental solos, many keyboard works and at least thirty songs are all part of her immense contribution to Australian composition.

Holland is undoubtedly best-known for the numerous musicianship and theory textbooks that she wrote over many years and that would have earned a considerable amount in royalties. Even the catalogue listing at the National Library states that Holland's name became synonymous with music theory in Australia5. Despite the obvious advantages of being the Australian expert on music theory, this has meant that Holland herself and some of her more serious compositions have been overlooked by music critics. Holland has been dismissed as being a miniaturist, and it is true that some of her serious compositions are relatively short. There aren't many large-scale works - operas, instrumental concertos, or an abundance of symphonies - in her oeuvre. Composers who were her peers have received more attention than Holland, who wrote shorter, more concise works for ensembles or solo instruments6.

With no financial worries, Holland could afford to go to concerts and rehearsals and pay for extra lessons, and consequently, when she studied in England after November 1937, her time was very well spent. Also, in 1951, the family were able to spend a year in England while Alan Bellhouse taught in an exchange program and Holland studied composition with Mátyás Seiber.

John Davis, who wrote the foreword, commented: 'Dulcie was a woman of her time in many ways. Her travelling to London to study at the Royal College of Music was not a common thing for a young Australian woman to do, although a handful of other female composers of her generation did likewise. What courage it must have required to embark on such an adventure! Her role as a wife and mother may have somewhat inhibited her creative work, as with her contemporaries, but it was always there, indeed some of her more significant works were realised in the years when family commitments were most pressing.

'This book outlines many details of the composer's life, much of it never before examined. How fortunate we are to be provided with such a detailed picture of Dulcie Holland, composer, pianist, teacher, wife, mother, and iconic figure in Australia's musical landscape!'7

The scores that have recently been published include some that were available at the Australian Music Centre - Sonata for cello and piano (1993) and Sonata for violin and piano (1937) - and three that were discovered in the archives of the National Library of Australia - In Tribute (1932), Fantasy Trio (1938), and Festival Flourish (1965). The Kambala Suite, the provenance of which even Holland herself had no idea of and which was finally unearthed in the Rare Books Collection at Fisher Library, University of Sydney, has been published for the first time and presented to Kambala School for Girls in gratitude for their assistance in providing much-needed material and information about Holland's time there as a teacher and president of the Old Girls Association.

The recording In Tribute that is part of this project contains world premiere performances of In Tribute for violin and piano and the Fantasy Trio, and the first ever CD recordings of the Four Aspects, An Evening Stroll for piano, Sonata for Cello and Piano and Ballad for violin and piano (transcribed from the original version for clarinet and piano.) The performers are Goetz Richter, (violin), Minah Choe, (cello) and Jeanell Carrigan (piano).

All these works are now available and published by Wirripang so that scholars and performers can again enjoy the music of Dulcie Holland. It is a tragedy that a biography and discussion about Holland's music has taken until now to be written. She is certainly a composer who deserves to be celebrated. In her own words: Composing is very difficult. It needs a lot of concentration and dedication to get things just right. I feel I'm a missionary in music in a way.8

6 Composer Peggy Glanville-Hicks who studied at the same time in London as Holland and born only one year previously has to date no fewer than four biographies written about her.

7 From John Davis's foreword to A Musical Missionary : the life and music of Dulcie Holland.

© Australian Music Centre (2020) — Permission must be obtained from the AMC if you wish to reproduce this article either online or in print.