An exciting group of composers, performers and educators, including several first-time recipients, were announced as the winners of the 2017 Art Music Awards on Tuesday 22 August. Together these composers, performers, educators and organisations represent the most outstanding contributions of 2016 across the genres of contemporary art music, contemporary jazz and experimental music.

The winners across 11 national categories and 8 State and Territory categories were honoured at an industry celebration at the City Recital Hall in Sydney. Now in its 7th year, the Art Music Awards is the only national event in Australia to acknowledge the extraordinary achievements and creative successes of those who excel in these genres.

Composer Liza Lim took home two of the coveted Work of the Year Awards. The Instrumental Work of the Year winner How Forests Think was praised by the jury as 'a work of epic scale, displaying a staggering level of invention in form and instrumental interplay and colour'.

Lyle Chan, first-time finalist
and winner of the Orchestral
Work of the Year
© Tony Mott

The Vocal / Choral Work of the Year went to Lim's opera Tree of Codes, 'A true Gesamtkunstwerk', according to the jury. 'Every element is rendered with tremendous care; electronics are integrated very finely into the work; the role of birdsong is particularly striking [...]. The orchestration creates an exquisite array of colour and the arias are beautiful and inventive', the jury commented. (Read an interview with Liza Lim about this work.)

The Orchestral Work of the Year winner was the first-time finalist Lyle Chan for his Serenade for Tenor, Saxophone and Orchestra ('My Dear Benjamin') with text taken from Benjamin Britten and Wulff Scherchen's youthful correspondence. The relationship between Britten and Scherchen was shattered by World War II when the young German man was incarcerated as a prisoner of war. The jury praised Chan's work as 'beautifully scored for orchestra, with sensitivity and understanding of the subject material and of writing for voice.'

Jazz pianist and composer Tom O'Halloran received the Jazz Work of the Year award for Now Noise, an album composed for his group Memory of Elements. 'A fresh and thoughtful work is epic in scale, demonstrating outstanding compositional craft, many interesting, subtle and well-executed ideas', said the jury about O'Halloran's work.

The Award for Excellence in Jazz went to Andrea Keller for the creation, presentation and release of contemporary jazz in 2016. According to the jury, Keller is 'an inspiring and good role model, with a rich, diverse and prolific output for 2016'. Keller is also a recent recipient of an APRA Professional Development Award, and a previous Art Music Award winner.

The Award for Excellence by an Organisation was awarded to Speak Percussion 'for their great vision, fully realised in a sustained, innovative and entertaining program of concerts, commissioning, education, professional development, and professional collaboration'.

The Award for Excellence by an Individual was awarded to Daryl Buckley for over thirty years of contribution to the international projection of Australian contemporary performance, ideas and practice through the work of the ELISION ensemble. 'Daryl's positioning of Australian artists internationally, especially ELISION, and his role in establishing the Judith Wright Centre as a multi-disciplinary, experimental space, are among the many achievements which demonstrate his wide-reaching impact on Australian music', summarised the jury. 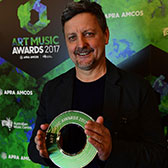 Daryl Buckley (Award for
Excellence by an Individual)
© Tony Mott

The Award for Excellence in a Regional Area went to Western Australia's Tura New Music for their exceptional 2016 Regional Program: 'a year-long festival, outstanding for its professionalism, vast distances covered, use of the local environment and for leaving resources and experiences in the communities with which it engaged'.

Clocked Out with Bruce and Jocelyn Wolfe received the Award for Excellence in Experimental Music for 'The Piano Mill' project, 'an innovative realisation that highlights the interdisciplinary possibilities of experimental music in combining architecture, acoustic ecology and instrument-making in an immersive experience of musical accidents, performances and installations responding to place', commented the jury. (Read an article about this project on Resonate.)

One of last year's winners, Moorambilla Voices, returned this time to receive the Award for Excellence in Music Education for their 2016 season. The jury admired the way Moorambilla's programs enable young students to encounter art music as a living form that can express their own experiences, while at the same time developing their understanding of sophisticated musical ideas, forms and techniques.

As announced earlier this month, the Award for Distinguished Services to Australian Music (as determined by the APRA Board of Writer and Publisher Directors) was presented to the legendary John Pochée OAM for his influential and visionary work as a jazz drummer and bandleader.

Eight State and Territory awards were also presented recognising contributions to art music all over Australia in 2016. For details, please see the list below.

The 2017 Art Music Awards were staged jointly by APRA AMCOS and the Australian Music Centre (AMC). The event was hosted by Simon Marnie, with musical performances curated by Gabriella Smart. Presenters at the event were Sandy Evans, Paul Mason, Stephen Lias, Natalie Williams and Marshall McGuire.

APRA AMCOS and the AMC congratulate all the 2017 Art Music Awards winners on their outstanding achievements.

Performance of the Year

Vocal / Choral Work of the Year

Jazz Work of the Year

Award for Excellence by an Organisation

Award for Excellence by an Individual

Daryl Buckley for over thirty years of contribution to the international projection of Australian contemporary performance, ideas and practice

Award for Excellence in Music Education

Moorambilla Voices for their 2016 season

Award for Excellence in a Regional Area

Award for Excellence in Experimental Music

Award for Excellence in Jazz

Andrea Keller for the creation, presentation and release of contemporary jazz in 2016

NT Award for Excellence in a Regional Area
Ngarukuruwala for Ngiya Awungarra (I Am Here, Now)

TAS Award for Excellence by an Organisation
Mona for Mofo 2016

VIC Award for Performance of the Year
Chamber Made Opera for Permission To Speak by Kate Neal, with text by Tamara Saulwick

© Australian Music Centre (2017) — Permission must be obtained from the AMC if you wish to reproduce this article either online or in print.