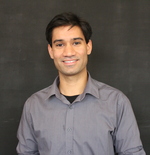 Sebastian Phlox (born 1989) is an Adelaide-based composer and musician, currently completing his doctoral studies at Elder Conservatorium of Music. Having written predominantly for chamber ensembles, his musical style is influenced by his ongoing interest in neoplasticism, and in abstraction through simplicity in colour and geometry.

As part of his current research he is working on creating exploratory pipe organ music, using extended techniques to expand the scope of the instrument in contemporary repertoire. Sebastian also works with electronic music, with a focus on hardware and circuit-bending.

Sebastian has studied under Graeme Koehne, Charles Bodman Rae, Stephen Whittington and David Harris. His works have been premiered by eminent musicians and ensembles including the Australian String Quartet, the Soundstream Collective, leading members of the Adelaide Symphony Orchestra, and Australian and international soloists. He is regularly commissioned by local Adelaide orchestras and choirs.

Having a passion for multidisciplinary performance, Sebastian enjoys creating collaborative work with a range of artists, particularly dancers and creative writers. When not composing, Sebastian is an organist and conductor, working with several ensembles around Adelaide. An early music enthusiast, he also performs occasional baroque concerts with a small chamber ensemble. He is principal organist at Crafers Church of the Epiphany.