Image: The Muses Trio in the studio

Natalie Williams writes about Fire Dances - a project involving eight composers and the Queensland-based Muses Trio. One of ABC's Fresh Start commissions, the Fire Dances is now available - for details see ABC Classic website. The score for the whole collaborative work is available now from the AMC Shop.

As the accumulating social challenges of 2020 roll on, significant events from just a few months ago now seem relatively distant in our collective consciousness. Prior to the COVID-19 pandemic, Australia's summer began with news of the enormously destructive bushfires that devastated our nation. Long since replaced with the preoccupation of lockdowns, social distancing, and public health and safety, the echoes of bushfire stories resonate within our Australian psyche, even now, as a shared, but distant, reminiscence. Such pivotal moments in our nation's history should not be lost to the passage of time, even though they occurred in the shadow of a since globally catastrophic event.

When ABC Classic announced their 'Fresh Start' grants in May 2020, for musicians to compose and record new works for broadcast, I designed a collaborative project that would bring the bushfire stories to life. The grants called for new works of short duration, suitable for broadcast, that would support diverse Australian voices. With this brief, Fire Dances, a suite for piano trio, began.

I reached out to the Brisbane-based Muses Trio, with whom I have collaborated twice before, and proposed the new work. They were immediately supportive and enthusiastic about the project. Our goal was to create a new piece that reflected upon the environmental devastation of the bushfires in ways that represented our nation.

We approached eight women composers, one from each state and territory, to write a short movement reflecting on the bushfire tragedy. The works were unified only by the idea of a short 'dance'. This approach ensured a truly national Australian work, wherein the eight collaborating voices would comprise a greater whole, a snapshot of voices from across the continent.

The composers were chosen based on their existing relationships with the Muses Trio, and among them were also those who were highly attuned to their sense of place within the environment. All eight writers were excited about the project and enthusiastic about their own ideas within a larger work. The pieces highlighted Australian environmental themes, depicting both the bushfires and the current challenges of climate change.

The eight composers writing a 'Fire Dance' each were: 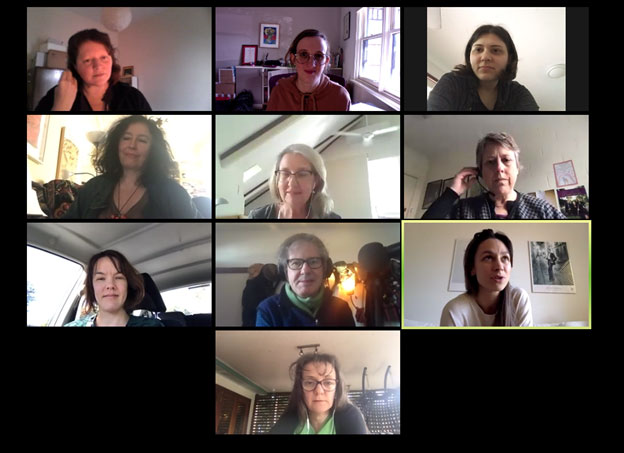 The pieces ranged from depictions of fire types (Crowning Dance, Wall of Flames and Fire Storm), to a movement about renewal and regrowth (Cycads After Fire). In the Embers' Path is written from the tree's perspective and the two Haze movements depict the haunting density of smoke-filled skies. Will-O-Wisp imagines the spirits of animals lost to the fire fronts.

The pieces use extended techniques for all players, intricate instrumental textures, improvisation, and innovative approaches to dance forms. Many movements highlight the power, speed and enormity of destructive fire, and depict the permanent impact on the people and animals within its path.

Group commissions exist within Australian music literature (Gallipoli Symphony, 2015, and the Diggers Requiem, 2018), but Fire Dances is the first work of its kind to involve a resident composer from each state and territory. Our resulting piece is, by default, a work of national significance. The promotion of new music by women composers is also a significant outcome, considering that ABC Classic's target quota of broadcast music written by women is currently 12.5% and climbing.

The broadcast context of this new work ensures that these Australian stories will reach a wide national and international audience through ABC Classic's online streaming platform. Our goal for Fire Dances was to reimagine the wildfire stories through musical pieces, taking the artistic result to a global listening audience who shared in witness to the immense devastation of our land, through wildfire.

A collaborative composition presents logistical challenges during creation. Our geographic separation was heightened by nation-wide travel restrictions and our sense of isolation was made ever more acute within individual state and territory lockdowns. So, like many other working contexts, our Zoom meetings began. In late July we first met as a group of eight composers, along with Christa Powell (violin) from the Muses trio, and Australian music producer Stephen Adams from ABC Classic. The composer cohort was diverse, including established, emerging and mid-career composers. Stylistic voices also varied, some with a background in jazz and crossover writing, some with a purely classical background, and others who work extensively in improvisation and cross-disciplinary contexts.

How do eight eclectic voices cohere within one chamber suite? Collectively, we created a shared online Google document, where we each contributed aesthetic ideas about our respective movements. This portal enabled all composers to learn about their collaborators' work and, in some cases, to adjust and reshape their own creative processes. The problem of coherence between movements arose in our discussions: which key was each movement written in, and in what order do we assemble the dances, once all eight movements were complete? The sense of comradery grew as we met monthly. Our united creative energy bolstered our isolated work as we felt a larger sense of disconnection from the society around us. 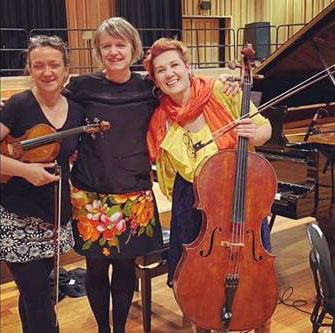 On October 3-4, 2020, the Muses Trio recorded the eight new Fire Dances at the ABC Studios in Brisbane, with producer Lucas Burns and engineer Costa Zouliou. A warm thank you also to Virginia Read for the successful end result! We are privileged to create these new works within a challenging year and hope that our eight Fire Dances will reach all Australians whose lives have been irrevocably changed by the 2020 bushfires. May our little dances bring a moment of artistic reflection as we rebuild together.